One Breath at a Time

It’s official! I have been cleared to run again! I’ll tell you about that, too, but I want to start off by telling you about my last two weeks.

If you read my previous entry, That Snot Running, you will know that on September 13 I underwent septoplasty and a turbinate reduction.   You will also know that I was unable to run for two weeks following the surgery. Yeah, in the middle of my marathon training.  As it turns out, even if I had been allowed to run, I don’t think I would have been able to do so.

My first two days after the surgery were really a breeze.  I mean, I was living in a Percocet haze, but I felt pretty good. But, by day 3, things started to take their toll.  The splints that are placed into your nose are really a lot larger than anything you would think should go up there and that, for me, resulted in a lot of pressure and discomfort. For the first week, I alternated between feeling like I had a severe sinus infection and someone had taken a baseball bat to the side of my face.  I ended up working very little in the week following my surgery just because getting up for more than a few hours generally resulted in an increase in the pressure and discomfort.  I tried to get off the Percocet, but every time I went to bed without it, I woke up in pain in the middle of the night.

Finally, last Friday, I started to feel better. I started to feel a decrease in the pressure and other than a persistent feeling of having water up my nose, I could tell I was on the mend.  The splints, however became increasingly annoying.  Really, you have no idea what it feels like to have plastic of this side stitched to the inside of your nose.  Here is a picture if you really want to envision the size of these things.  Of course, mine didn’t have the tube attachment, but this is about the size of them.

So, today was the big day! Splint removal!  I will spare you all of the gory details, but let’s just say, they didn’t make for a pretty sight when they came out.  However, the difference in my breathing was immediately noticeable.  I go back in 4 more weeks for them to check on the healing process and should have my final post-op visit 6 weeks after that. But, the other great part about today’s visit is that I was given permission to resume training.

After coming home for a little rest and to let the lidocaine they had sprayed up my nose wear off, I decided to go out for an easy couple of miles to get my legs back under me.  I didn’t want to push it at all, so I aimed to go out for a 2:1 run/walk ratio for just 2 miles.  I felt amazing!  My plan between now and next Saturday is to build up to about 10 miles.  Once I do a 10 miler, then I’ll re-evaluate where I am with regard to my original training plan.

My race will be December 8 in Kiawah.  I’m bound and determined to run the full!  Therefore, my hope is that by the 2nd week of October I can up my training to about 50% of my plan and go to 75% the week after that.  I know I’m going to need to be aggressive, but I also need to pay attention to my body.  It would totally suck to finally have my breathing fixed and end up with an overuse injury.

So, here we go!  Let the games begin!

208 Miles of Awesome Coming Your Way! 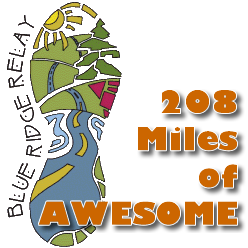 The Woo Hoo Crew is about to embark on a new journey and, for most of the team, a new milestone – the Blue Ridge Relay. With the tagline “Consider all others a warm-up,” this relentless and beautiful race winds its way through the Blue Ridge and Black Mountains of Virginia and North Carolina. Here are some of the stats:

Oh man, what have we gotten ourselves into?!

Actually, I know exactly what’s in store for us. I was fortunate enough to do this race 2 years ago and had the time of my life. While my team members in 2010 were great, I really only knew 3 of them. This time around, we built a team around some of our favorite people on the planet who we knew would elevate the level of fun and awesomeness at every twist and turn of this mountainous course. I honestly couldn’t be more thrilled to spend 36 hours in a van with these people!

We will be live tweeting the entire race from 7:00 a.m. Friday morning (9/7) through 6:00 p.m. Saturday evening (9/8). If you want to follow our progress, here are some different options:

Don’t worry, if you miss out on the live feed, we’ll be unleashing plenty of video & pictures on you upon our return!

You know you love it.